GTA V is a criminal simulator and action game. Set in the massive city of Los Santos, it challenges you to make your way to the top of the outlaw hierarchy. Survive gang wars, run away from the cops, and orchestrate the state-of-art heists in GTA V.

GTA V is a triple-A title. Maybe its rendering is slower at times. Perhaps it has awkward movement physics. But it still offers a rich open world, which doesn’t lose its gorgeousness even on medium chipsets and GPUs.

GTA V has standard RPG controls on all platforms. The only issue that some players have is bringing up the phone: T (PC) or up arrow (consoles). Another common issue is putting down the plane wheels and detonating C4: G on PC and left joystick on consoles.

The antihero trifecta will deal with an armada of enemies. The familiar Ballas gang, FIB, Merryweather mercenaries, Chinese triads, lunatic billionaire, redneck crackheads, and other sophisticated people will stand in your way.

Additionally, you can complete side missions, earn bounty, buy businesses, and meet various weirdos. If you enjoy free-roaming, there’s a good chance you’ll run into a strange event. A frozen alien, Mt. Gordo ghost, flying saucers, creepy Bandos, Bigfoot & Peyote mission… There’s even a noir detective mystery from the past to investigate.

Besides, you can join the multiplayer where you will compete with other people over the criminal crown of LS. Put a gang together. Complete mobster quests. Amass a fortune and rule the criminal underworld supreme like Antonio Montana.

GTA is too big to run out of content. It’s a game that never loses its flavor due to the mission variety, amazing humor, and well-directed action. Every hero has a catchy personality, witty quotes, and even a life philosophy to share.

Hot action, charmingly stupid goons, big open world, and a catchy character trio — download GTA V to get a taste of all this criminal goodness! 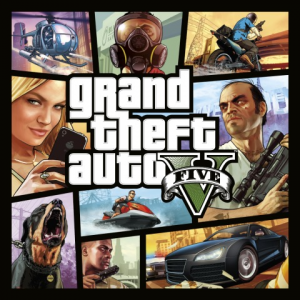 Grand Theft Auto V
44.9GB
Take a note. This app’s size is bigger than the average in this category