Gachaverse is a dress-up anime role-playing video game, created and published by LunimeGames in 2018. You can play with more than 100 characters and a myriad of dressing styles. There are in-game purchases. Gachaverse is a sequel to Gacha Studio and is a major part of the Gacha franchise. Gachaverse is not hugely popular. But if you’re a fan of anime and the Gacha series, the game is sure to tickle your fancy.

In Gachaverse, you are a smartphone-addicted gamer who only gets to play inferior characters in freemium gacha games. Out of despair and frustration, you destroy your smartphone and wander the streets aimlessly. Out of the blue, a sword appears in an alleyway —“Gachasword”, to be more precise. You grab it and over time find yourself in a world of Gachas.

So, you end up in the Gachaverse world as a proud summoner exclusively chosen by Gachasword. Throughout the game, you design your own anime-sque characters by customizing them extensively and dressing them up in tons of various outfits. By making the most of the game’s Skit Maker functionality, you get to play out your own scenarios and enjoy decorating your own room the way you see fit.

Despite being an early-access game, there are not many bugs within the Gachaverse gameplay. However, the gameplay definitely lacks major RPG elements and instead is based on having players develop their own characters. Still, if designing your own characters is something you enjoy, Gachaverse does look very promising.

Before you unlock the game’s dynamic storyline and battle system, you will have to create and customize a lot of characters. Character customization in Gachaverse is beyond impressive. Multiple hairstyles, outfits, weapons, accessories, as well as facial expressions, backgrounds, and limitless color options — you will be amazed by this versatility.

While playing the game, you will be treated to lots of fun just by designing your own characters. You will like the voice acting, as well as character interaction and the overall feel of the game. Multiple features within the gameplay will definitely boost your curiosity and contribute to your satisfaction.

Gachaverse flaunts some really awesome visuals. The characters are beautiful, their outfits, shoes, accessories, as well as their surroundings are also visually appealing. With its vibrancy and amazing visual detailing, this anime game manages to satisfy even the most sophisticated requirements in terms of graphics and style.

The game’s brilliant visuals contribute to its amazingly soothing and time-killing effect. Chances are Gachaverse becomes an apple of your eye both in terms of graphics and gameplay. 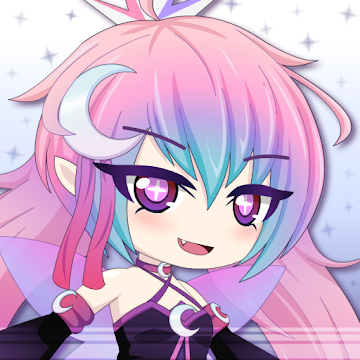